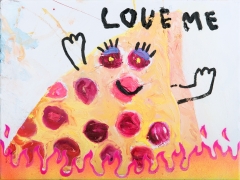 Freight+Volume is excited to announce Isla Bonita, an exhibition of recent works by Bel Fullana. Questioning dynamics of gender and sexuality, Fullana’s paintings employ a diverse range of painterly idioms, including elements of kitsch, abjection, and irony. Presenting the bacchanalian summer scene of Mallorca and its influx of tourists from the perspective of a native, Fullana outlines a “parallel universe” in which “everything is fake and ephemeral, and social relations are established with an expiry date”, in the words of the artist. Evoking notions of fragility, innocence, and the ambiguous space between shame and victimization, she juxtaposes hypersexualized figures with imagery reminiscent of both childhood naivety and reckless escapism and adult depravity.

Tropical settings recur throughout Isla Bonita, particularly evident in Cosmic Beach Towel and Palote Sunset Beach Towel, which display stereotypical, quasi-nostalgic tableaux of island vistas; however, in Fullana’s work they are charged with an uncertain, almost threatening aura. In the former, her depiction of leaping dolphins set against a background of palm trees and a cosmic panorama recalls the cloying kitsch of the trinkets sold at seaside resort towns and boardwalks, while in the latter, a pair of embracing lovers are seemingly defaced with crude graffiti of genitalia. Portraying a sort of emptiness or void within paradise, these works blur the line between reality and fantasy, creating a surreal, ambiguous site that parallels the ways in which we construct idealized social and geographic mythologies. Fullana identifies this with a universal “yearning for partying, the sun, and the beach that is repeated in multiple places worldwide”, a setting wherein the individual “is abstracted from his daily life and allowed to become a parody that exists only in that environment” for a finite, compartmentalized period of time.

Fullana’s depiction of women is particularly striking; confronting conventional notions of femininity, her figures are hypersexual, hedonistic, and often frantic, their countenances distorted and stained with smeared makeup, as in Koko Loko, Zombies, and Early Morning. Alluding to the comedown after a night of partying and intoxication, Early Morning is tinged with desperation and despair, offering a counterpoint to the playful sexual freedom displayed in All Inclusive, Hola, Soy Paris, and Pool Party. 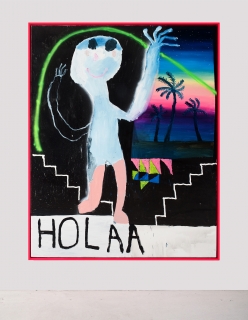 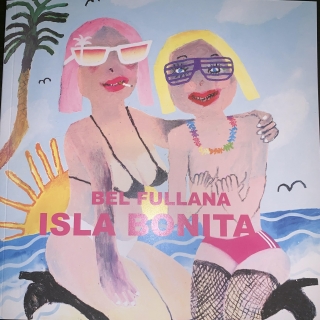