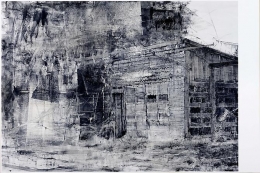 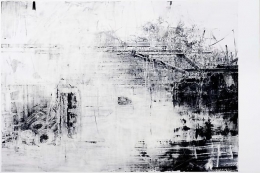 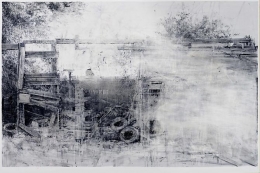 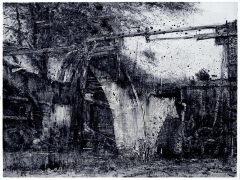 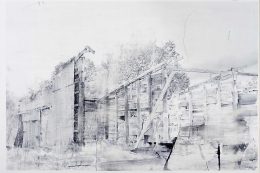 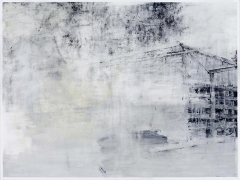 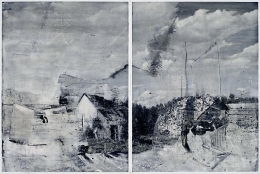 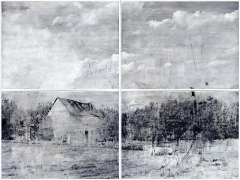 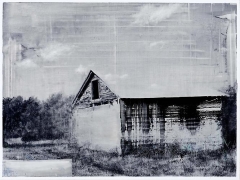 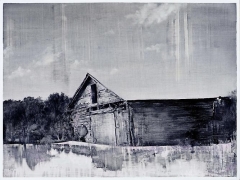 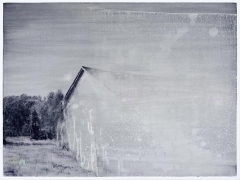 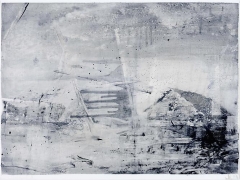 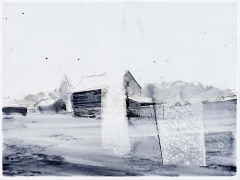 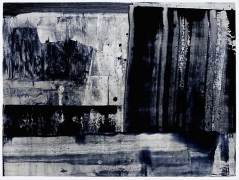 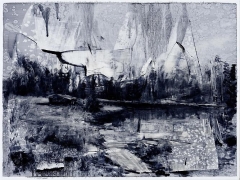 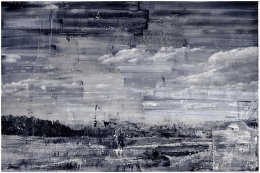 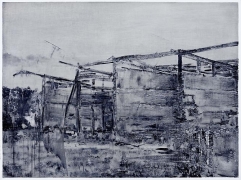 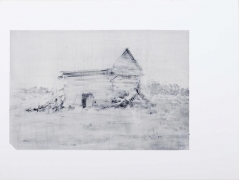 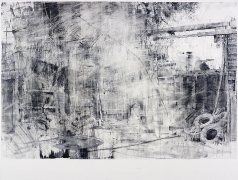 PAINTING THE BUILDING / BUILDING THE PAINTING

Freight and Volume is pleased to present Damian Stamer’s third exhibition at the gallery, Sundays. Stamer is a young artist whose latest suite of paintings is born from a neat geographic triangulation of influence and style: A European mentality aimed at the ramshackle architecture of the American South. Over the past five years or so the artist has been finding his own way through an interesting thicket of forbearers, precursors, and peers, most notably the New Leipzig School in Germany. This stretch of time has also seen a rather austere paring down on Stamer’s own part, from early canvases that flirted with text, meta-self-portraiture, exploding structures, and a free-ranging palette, to these new oil-on-panel pieces, which are mostly greyscale with occasional bleats of wild color, and which tirelessly interrogate and reimagine a handful of specific locations in Stamer’s home state of North Carolina.

What are those places? For the “Patrick Road” paintings, the subject is a building on the eponymous street in northern Durham County. “It’s fairly enigmatic,” Stamer says. “A farm, but it doesn’t look to be that much in use.” He’s been back several times to take large-format reference photographs for the paintings; the structure has only degraded with time. “The thing’s falling apart in front of my eyes, over the years.” Subject, Stamer says, can be a springboard for formalist concerns, but it’s not arbitrary or unimportant. These locations have some biographical resonance—how else to paint them with such a reverent patina? At some point, he seems to suggest, the objecthood of the painting itself surpasses or equals the objecthood of the subject. This is especially apparent with the newest works from 2013, in which the artist puts greater emphasis on physicality: “The surfaces are important; I’m trying to figure out new ways to make marks all the time, for every painting.”

Personally, I’ve long been interested in this concept of building or making a painting—as opposed to painting it. It’s come up in varied conversations, with Jack Whitten (who embeds and anchors acrylic objects in a field of paint) and Fred Tomaselli (who buries found images and organic material in a tomb of resin). Stamer starts with a figurative interest in subject, but then proceeds to work on that image, to efface it, blur it, hide it, scrape it, partially to “super-compress time,” as he says, to imbue the finished piece with a heavy burden (history, weight, surface scars). Stamer takes seemingly abandoned architecture as his subject, and then proceeds to build a painting that reflects on that physical place, creating rough monuments to the otherwise passed and forgotten. The structures he represents—once built by hand, now left to ruin—are rebuilt, by hand, with paint, and distressed to reflect their heritage.

Part of what makes these paintings so exciting is the sense that Stamer has tamped down the diffuse enthusiasm of his earlier efforts, arriving at a more refined vocabulary that nods to his influences while also being clearly his own. The Germans are still there—Leipzigers like Matthias Weischer, for instance, but also Gerhard Richter and his signature squeegee-drag and photo-blur. Stamer’s compositions are also more fully integrated, the impasse between abstraction and figuration more suavely negotiated (gone are the harsher juxtapositions between, say, a realistically rendered hay bale or barn and its surrounding weather system of daubs, marks, and brushstrokes.)

Landscapes, which is how Stamer characterizes these pieces, are “the biggest lie you can make,” he says, “suggesting a space that you can ‘get into.’” Part of what he’s after is a push/pull response on the part of the viewer, drawn into that space before being ejected back out—with white borders that clearly contextualize the image as an image, or diptych and four-panel compositions that break or fracture the unified landscape into its constituent, painted parts. Those techniques have interesting resonances with the 1960s work of Llyn Foulkes, recently rediscovered and feted with exhibitions at the New Museum and Andrea Rosen Gallery—particularly his large-scale paintings that use borders to evoke the format of a postcard. Both with Foulkes and Stamer there is a marriage between elements of so-called traditional landscape and framing devices that disrupt or sabotage that reading, an uneasy friction between the real and the artificial. “You’re always popping back to the surface, or being blocked from that space,” Stamer says. “I like that in-between. It’s at once an illusionistic space, one you can enter, and at the same time it’s rejecting that and calling attention to itself as a painting.”

If the painting is a building, then Stamer constructs it only to deconstruct it—a mad logic for architecture, albeit a productive one for art. Arthur C. Danto, in Beyond the Brillo Box, writes of art’s history of conceptual erasures, and how for painting, the conceivable endpoint for such a project is “pretty much the blank canvas.” (Think also of Robert Rauschenberg’s cheeky/sacrilegious Erased de Kooning Drawing of 1953.) In Stamer’s case, it’s self-erasure, self-defacement, but not to the point of blankness. A series of oil-on-panel works from 2012—Southern landscapes named after elite nightclubs and lounges in New York City—are a good case in point. Chloe takes an otherwise pristine scene (some scrubby brush, a cloud-dappled sky) and subjects it to impolite marks: a zigzagging slash, a swoop of black pigment, a vertical rectangular smudge in green. Such gestures question the purity of the landscape that are the work’s subject, the entire tradition of landscape painting, and the supposed integrity of the material surface (hacking away at the aforementioned “space that you can get into.”)

With the paintings in Sundays, the way the image is worked on often generates an unstable blurriness, the subject’s integrity suddenly mirage-like. We can, technically, still tell what we’re looking at, though this is an easier feat if the works are seen together as a series of manipulations and riffs on a single location, like Patrick Road. Patrick Rd. 4 gives us a clear vision of the basic architectural bones. Patrick appears to erase most of that, as if the artist had mopped the surface with a turpentine-stained rag: A do-over that was never done. (“It seemed like the right thing, to keep going and taking away,” Stamer explains. “Sometimes the more you take away the more powerful the image becomes.”) Patrick Rd. saves most of the representative features, but subjects them to a mirage-like shimmer, as if the world is about to be stretched into pure static. And Patrick Rd. 5 retains only the barest suggestion of a structure in gritty, roughly worked oil paint—it would likely appear as an abstraction without the counterpoint of its predecessors. Yet that painting is almost readable compared to the small-scale South Lowell 6, in which Stamer has entirely obscured his source material, creating a work that resembles a black-and-white photograph that has been physically and chemically degraded. The painting turns Stamer’s “in-between space” into a taunt, daring to be recognized—as house, road, sky, field—but offering up very little to directly relate to.

After 3 years in New York City, Stamer returned home to North Carolina, predicting that closeness to his chosen subject matter might have a positive effect on the work. (He also enrolled in the M.F.A. program in Chapel Hill, making him a particularly qualified, or overqualified, graduate student.) His goal now is to work between two studios, one in Brooklyn, the other “out in the sticks,” not far from South Lowell Road itself. I’m personally excited to see how experience, and this unique shuttling between city and country, continues to influence his artistic trajectory—what he’ll push forward, what he’ll abandon, what he’ll recast in a different light. Earlier experiments—with text, with color—could certainly creep back in intriguing ways. For now, “Sundays” presents a snapshot of Stamer’s current, mature voice, using painting to work through a variety of concerns—about landscape, nostalgia, photography, the South, architecture, and the slow erosion of time. They’re postcards from a place we’ve likely never been, but somehow inhabit, for as long as the illusion allows.

Stamer has received numerous international awards including a Fulbright Grant, Jacob K. Javits Fellowship, as well as a Rotary Ambassadorial Scholarship. He has studied internationally at the Hungarian Academy of Fine Arts in Budapest, Hungary and the Stuttgart State Academy of Art and Design, Germany. Damian received his M.F.A. from the University of North Carolina, Chapel Hill and his B.F.A. from Arizona State University (summa cum laude). He has exhibited extensively in the U.S. and abroad, including a solo show Overgrown at The Center for the Study of the American South in Chapel Hill, NC and a two-person show Stamer/Thaler at Art Factory Gallery in Budapest, Hungary. He has an upcoming solo exhibition at Galerie Michael Schultz in Berlin in March 2014.

Please join us for a public reception on Thursday, November 21st from 6-9pm. For further information please contact Nick Lawrence at 212-691-7700 or nick@freightandvolume.com.