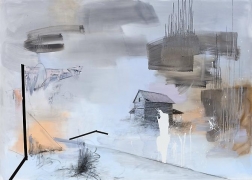 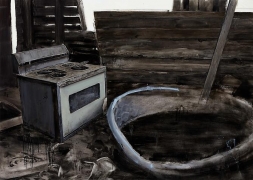 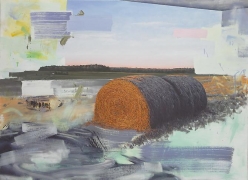 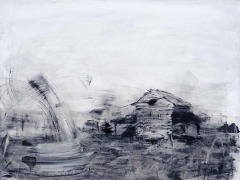 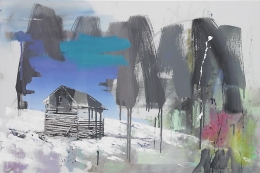 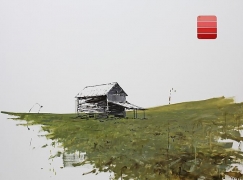 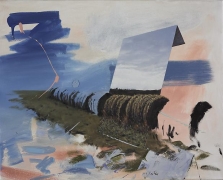 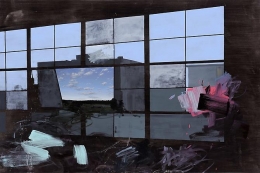 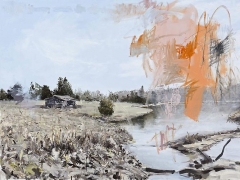 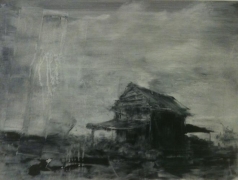 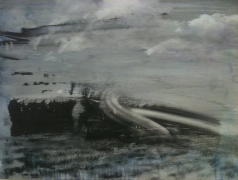 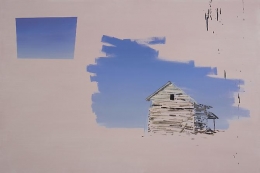 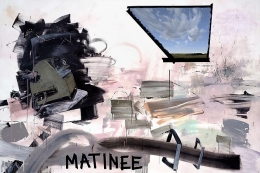 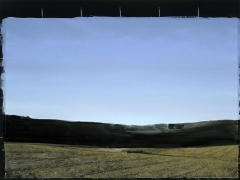 FOR IMMEDIATE RELEASE: DAMIAN STAMER SOUTHERN COMFORT @ Freight+Volume, April 12th- May 19th, 2012.
In the video room: Down in the Den, a collaboration by Damian Stamer and
George Jenne.

The history of grand American landscape painting – Church, Bierstadt, Inness, the Hudson River School, etc – has always been glossed with nostalgia and sentimentality for a utopian Wilderness come before. Those untrammeled, lush panoramas of the 19th and early 20th century were filled with idealization of frontier spirit, worship of the virgin wilds which existed in the pre-Industrial-age, gilded with American patriotic pride and romance. Damian Stamer places himself firmly in this tradition, but brings that perspective abruptly into the present: from a political, personal as well as art historical vantage point.

Stamer’s reminiscences of his childhood in North Carolina, liberally inhabited by hay bales, barns and tobacco shacks, is as much about longing for yesteryear and simpler times as it about homage for the grand masters of sixties’ Abstract Expressionism. In his signature blend of realism and abstraction, we witness the conjunction of epic gesture and subtle rumination. The paintings are as much about paint and canvas as any process/conceptual painter working today, but the twist is that Stamer’s work is not afraid to delve headfirst into content. The narrative is mysterious, rife with contradictions. Do these empty, dilapidated barns invoke a post-apocalyptic, Mad Max landscape, where Mega Corporations have devoured the land, blown up the earth and left just the vestiges, the husks of life? Or are these scenes indeed remnants of a bygone era, imbued with the artist’s childhood memories of his grandparent’s stories, floating in a dream space where reality converges into fantasy? As Stamer explains: “Landscapes marry my form and concept by offering the biggest spatial trick of all, imbuing a flat canvas with infinite depth while simultaneously questioning how the physical environment I explored during childhood affects my identity formation both as an artist and individual.”

The paintings are about time as much as they are about a lack of time, an observation and meditation on the fleeting quality of existence – how the human footprint succumbs to the ravages of decay. Stamer casts a clear and un-jaundiced eye upon this process, as much as he reflects inwardly on his own evolution as a gifted, emerging painter in the art world today. His decision to work again in his home territory, while pursuing an active career in New York, reveals much about his quiet and unhurried philosophy on the nature of making great paintings. He sums it up this way: “The resulting self-reflexivity demystifies one illusion while creating even more. Correctly calibrating the relationships between illusion, mark-making, magic, comfort food, blue skies, southern accents and hay is the key to making my work.”

In the video room this month we are pleased to present a collaboration by Damian Stamer and George Jenne, titled Down in the Den. This 5-minute HD video installation serves as a portal between two disparate worlds and invokes the uncanny disorientation of witnessing spaces that are simultaneously familiar and foreign. A minimalist basement den frames a monolithic video projection, a window into a southern gothic terra incognita that swings fluidly between lucid serene landscapes and the relentless detail of a grim microcosm underfoot. The work is made in the spirit of Jean Luc Godard’s decidedly low-tech science fiction film, Alphaville and the suburban grotesqueries of John Cheever’s short fiction.

The idea materialized out of a desire for the two artists to revisit the origins of their respective creative practices - exploring, as children, the backwoods of North Carolina. This time, instead of bubble gum and slingshots, they armed themselves with High Definition video equipment and set out to transform their native environs into a mental and physical space that is unnervingly alien. Jenne and Stamer invite the viewer into their home, to hang out in the den for a while and peer into the outland. It is a landscape polarized by hypnotic beauty and abject repulsion. Spend a moment in limbo between two fictions and decide which is cozy or safe, if at all.

George Jenne makes video and installation to affirm his belief in the pleasure of repulsion. “For me, to work from behind the lens of a video camera is to tap the pathological side of creativity - to impose control through obsessive scrutiny.” He pairs that which is sick and deranged with humor, joy and beauty as an allusion to our need to leaven our faults and self loathing with compassion. Jenne has exhibited at numerous venues including Exit Art, PS 122, The Center on Contemporary Art, Jack the Pelican Presents, and Frosch & Portmann. His work has been reviewed in The New Yorker, Art in America, Time Out New York and the Washington Post. He is a former faculty member of the Rhode Island School of Design and is currently a teaching fellow at the University of North Carolina at Chapel Hill. He splits his time between New York and North Carolina.

Please join us at a public reception for the artists on Thurs, April 12th from 6-8pm. For further information please contact Nick Lawrence or Kevin Kay at 212-691-7700, or info@freightandvolume.com 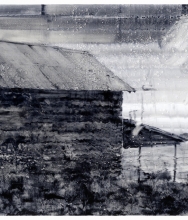 Stay tuned, the winner will be announced at an event hosted by Society 1858 on September 18.