Laurina Paperina, Still from the animation How to Kill the Artists - Episode 6, 2010

Laurina Paperina, Still from the animation How to Kill the Artists - Episode 7, 2010 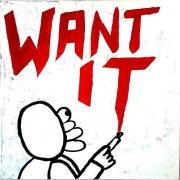 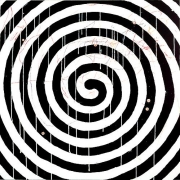 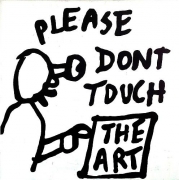 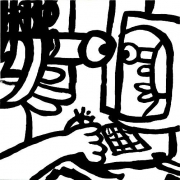 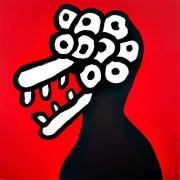 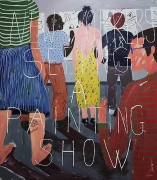 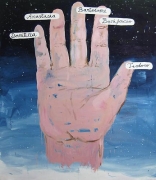 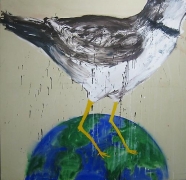 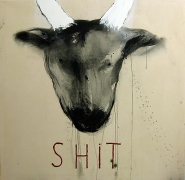 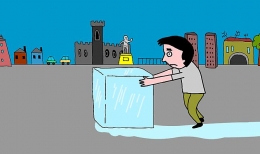 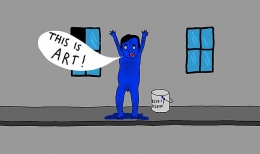 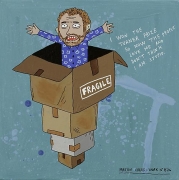 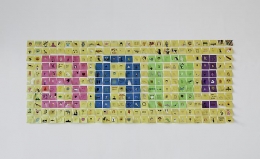 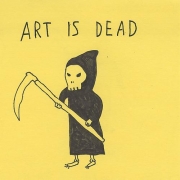 If Part One posed the various problems and dysfunctions of the artworld by a mid-career generation, Part Two offers some possible solutions by a younger generation who, despite all the obstacles, manage to keep a sense of humor and produce reaffirming (and sometimes hilarious) art. From Paperina's notion to "Kill All the Artists" as an antidote to the art world taking itself too seriously, to de Miguel's sly satire on pompous "Grad School Critiques" and NYC gallery hopping, to Noah Lyon's escape from art world incestuousness and pretention through his iconic depictions of Youtube and everyman's internet, these late twenty-and early thirty-somethings may despair at the system crumbling around them, but never lose hope and simply soldier on. What would be the alternative, anyway? To stop making art altogether?

The artists in Part II, Crisp, De Miguel, Lyon, and Paperina, all offer a fresh perspective, humorous commentary, and plenty of charisma. Part II exhibits a generational difference from Part I; these artists have a different outlook. They grew up with the Internet, Simpsons, 9-11, saw street artists rise to fame, spent a decade of their lives at war, and entered adult life at the peak of a great recession. The American dream they were promised their entire lives seems worthless. Their degrees do not necessarily help get them jobs; it is as if the rug was pulled out from under them. Even facing this hopeless uphill battle these artists have an abundance of optimism that is paralleled with a sarcastic sense of humor.

Lyon’s paintings swirl between a hallucination and a flippant joke. They are comical and address the art craze by referencing the speed of the Internet, the speed of NYC, and the speed of life. Who has time to waste? These paintings are moments. They ask you to say, “fuck it,” and act on impulse. They are fast and to the point, with bold flat colors, thick lines, and cheeky short text. Text like Want it and Fuck it. A bug-eyed spike-toothed cartoonish figure carries a narrative throughout the series. This character loses control, disappears, reappears, and acts on those bad impulses everyone has, but pretends not to have.

There is a simple bold grunginess to the work that reminds one of 80’s street artists. There is this “who cares” attitude, and a feverish need to create art that is apparent in his work. The paintings seem fun to make, are fun to look at, and they are - of course - funny.

De Miguel’s paintings are witty, mischievous, facetious, naughty, cheerful, and untroubled. The triptych of Rock, Paper, and Scissors is a throwback to childhood fun. The game is all about chance not strategy. These paintings do not seem strategic. They are honest, good-natured, and possibly contemptuous of the art world, but not cynical about art. They are committed to being what they are. The painting All over the world or Palomar portrays 2/3rds of a seagull shitting on the world. Bird shit is raining down everywhere. The world is on the brink of war, revolutions, financial collapse, and global warming. There is plenty of shit falling. Miguel’s paintings show how the art world loves itself. In her painting New Yorkers Seeing a Painting Show depicts a scene of people flocking to an exhibition of cat paintings, as if it’s the last cat painting exhibition on earth. Her characters are boldly soaking in the cats and each other without a care in the world. Who doesn’t love a good cat painting?

Paperina’s paintings and animations are ironic and frenzied. She kills the artists because she loves them. She takes the art stars off their pedestals, and reminds us they are human. She shows how comical the art world is. The text in her paintings range from I won the Turner Prize so now the people love me and don’t think I am stupid, Martin Creed-work N 876, to Art is dead, and my favorite, When you place your hand on the Bible, do you think about eternal questions: why are we here instead of nothing? by Jenny Holzer. Her work looks at how dumb the act of making art is. Paperina uses this dumbness to exploit the seriousness of the art world. These paintings are serious, but they are not self-absorbed. They live in the world of cartoons and anything can happen there. Cartoon characters can die and come back to life. They exist in an alternative reality. Paperina’s paintings exist in this reality. Anything goes. They are sociable, lively, and - above all - a riot.

Damien Crisp contributes a no-holds-barred political critique of the system, through audio, text and Basquiat-indebted, “aim-for-the-jugular”-style drawings. Crisp is an artist, writer and activist from southeast Tennessee. He graduated from the University of Tennessee’s painting program in 2005, moved to New York City, and received his MFA from the School of Visual Arts in 2007. He lives and works in Guadalajara, Mexico. His work includes painting, photography, installation, objects, text and video. His writings have been re-published widely and are followed daily on social media by his own group of readers. In 2010, he self-published the manifesto Slave (Expanded) - a critique of contemporary art’s corporate ethos - through his project The Ocean / The Waves Gallery and Unknown Press. The book served as a backbone for the gallery opened, then closed, the same year in New York. As an activist, he is focused on alternative economies, direct democracy, and confronting abuses of the police and corporate state. He was a body, a voice and reporter during Occupy Wall Street’s time at Zuccotti Park, as well as a trainer of hurricane recovery volunteers for Occupy Sandy.

Please join us for the public opening of The Decline and Fall of the Art World, Part II: The Other 99% on Thursday, Sept 12th from 6-9pm. There will be a full-color catalogue accompanying the exhibition released on Sept 7th as well, with essays by Nick Lawrence, Anthony Haden-Guest, Scott Indrisek, and Samuel Jablon.

For more information please contact Nick Lawrence at nick@freightandvolume.com or 212-691-7700.