acrylic dispersion and wood on archival inkjet print sealed with urethane and uv varnish onstretched linen on board.

acrylic, and wood on archival inkjet print sealed with UV varnish on linen on board 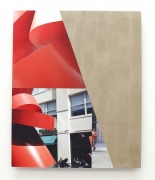 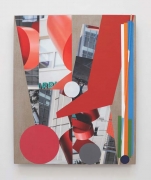 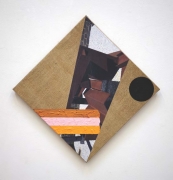 Freight+Volume is excited to announce Public Sculpture, an exhibition of new paintings by James Hyde. Continuing the photographic/ painterly integrations and contradictions of West, his last show at the gallery, this new body of work uses public sculpture to explore the relationship of materiality to picture making. Public Sculpture reflects Hyde’s enduring fascination with unexpected supports for painting, the created landscape, and the use of materials as painting strokes and marks. Encompassing myriad fractured photographic prints of public sculpture affixed on textured linen and chromed steel panels, Hyde develops these paintings further with a wide vocabulary of paint handling—impasto to flat; geometric to gestural, as well as incorporating chunkier construction-related materials—wood, glass and ceramic; ingredients which Hyde has integrated into previous bodies of works, such as the glass box paintings and works from his Unbuilt * show of 2009.

The works in Public Sculpture hinge upon the unique visual contingencies of sculpture in the public sphere—both ignored and part of a communal memory. Public sculptures are often both victims of the unique circumstances of their physical placement (challenged and contested) as well as a type of visual aggressor, placed by a third party into an already existing environment. Beyond these concerns, the experience of viewing a public sculpture is itself unpredictable and highly subjective, an act that is both private in the sense of individual reflection and inevitably public given the nature of the work. These paintings introduce a fresh variation of Hyde’s project of recontextualizing photography as both material and scaffolding for painting.

Hyde amplifies the locational contexts of the sculptures that appear throughout the show, with snatches of urban detritus and consumer society appearing throughout his cut-up, reformatted photographic grounds. In a series of three works, Public Sculpture with Coffee, Caffeinated (Sculpture), and Neighborhood (Sculpture), bits of Starbucks signage ricochet between planes of solid color and partial images of its namesake public sculpture, merging and conflating the quotidian function of the cafe in the urban environment with the rather esoteric character of public sculpture. Fragments of a bicycle, a ubiquitous symbol of urban life, weave throughout Bicycle and Sculpture and Public Sculpture with Bicycle; in other works, such as Scotch, the photographic print, linen ground, and passages of impasto paint manifest a self-contained expression of urban forms and materials, as if a rarefied, Platonic form of city life.

While these paintings are formalist in an almost gleeful manner Hyde also slips a sort of anthropomorphism to the work, evident in the aptly named  Sculpture Tips its Cap and Onlooking (Sculpture), wherein in a blown-glass circle affixed to the photographic print takes on an eye-like appearance. The material constructions of Peak (Sculpture), and Stepping (Sculpture) are like physical allegories, mirroring the motion implied in their names; like two parallel narratives, the formal interplay of Hyde’s embellishments and the underlying photographic print are both dynamic and autonomous, converging in unexpected and viewer-dependant ways.

Hyde has an eye for specifically resonant details, which, magnified and distorted, unfold onto a multitude of pictorial possibilities. As in his Magnasco paintings, recently shown at Elm Foundation’s The Boiler, in which discreet details from the work of late-Baroque painter Alessandro Magnasco are blown up to billboard scale and shrouded in painterly texture, taking on an otherworldly appearance, the works in Public Sculpture contain a network of visual signposts refracted to the point of material sublimation. Slabs of steel buildings, cropped human forms, and traces of graffiti, among countless others, slip between veils of reality and painterly expression; seldom coming to a resolution, the works in Public Sculpture reflect the ephemeral, ever-changing nature of their subjects.

James Hyde is a Brooklyn based painter.  His work ranges from paintings on photographic prints to large-scale installations, photography, and abstract furniture design.  He is represented by galleries in New York, Los Angeles, Richmond and Paris,. Mr. Hyde's work has been exhibited at the Maison de la Culture de Bourges and the Centre d'Art Contemporain d'Ivry, Galerie Fernand Leger/Credeac in France, the San Diego Museum of Art, the Brooklyn Museum of Art in New York, and the Zwemmer Gallery in London.  He has been honored with a Guggenheim Fellowship and a Joan Mitchell Foundation Fellowship, among others.  Mr. Hyde's pieces are included in the collections of the Nation of France, the Museum of Modern Art, Brooklyn Museum of Art and the Guggenheim Museum of Art in New York, the Denver Art Museum, and the Museo Cantonale d'Arte in Lugano, Switzerland. He has lectured as a visiting professor at a number of institutions, including Yale University, the Art Institute of Chicago, the Skowhegan School of Painting and Sculpture, Bard College, and Cooper Union. Hyde is currently the Kennedy Family Lecturer at the University of South Florida at Tampa. 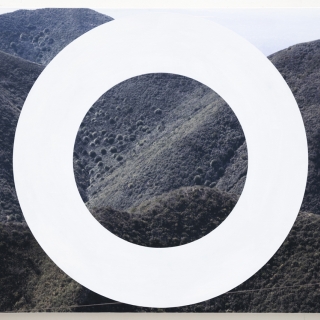 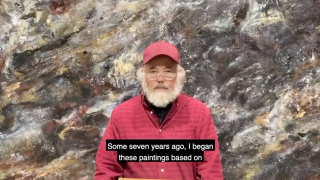