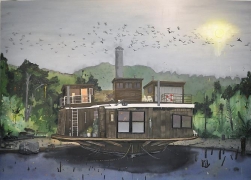 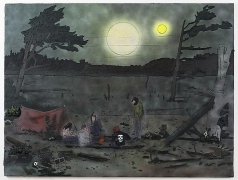 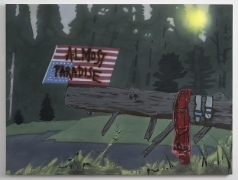 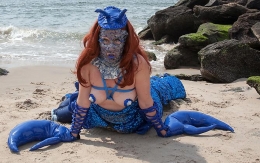 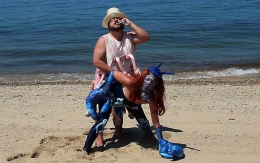 Freight+Volume is pleased to announce its third exhibition and second solo of the paintings of Texas-based, Carolina-born painter Kent Dorn, Shadowland, as well as the debut screening of Masshole Love, a new video by Brooklyn-based artist Rebecca Goyette, in the project space.

In Shadowland, Kent Dorn further explores a distinctly haunting wooded world and its unsettled inhabitants. With a nod to horror movies, hippie counterculture, and the rural Southern landscape of his youth, Dorn's distinct landscape paintings are not as concerned with an idyllic representation of nature as much as constructing a virtual stage for an unfolding melodrama. Littered with debris, overgrowth and remnants of past inhabitants, his landscapes are a conflation of the real and imaginary, where myths come to life.

As the title Shadowland suggests, Dorn’s landscapes allude to an interstitial space, purgatory-like, hovering between the living and dead, and the tangible or dreamed. However, for Dorn this land is not mere fantasy, but a platform for introspection on the conflicts, doubts, pleasures, and superstitions associated with the act of painting. By juxtaposing utopian art historical tropes built into the American landscape (the sublime, the utopian, the heroic) with archetypal characters (such as drifters, fugitives, mystics, outsiders, etc.) he builds narratives that provide clues to help navigate an environment latent with darkness, conflict and doubt.

In Shadowland, large-scale paintings sometimes depict settings devoid of people, but full of remnants of their presence. When characters do appear, they are somewhat ghostly, maybe resting on the bank of a river or together as a group, crossing a path in the woods. The idea of escape, or reaching a final destination, seems just out of reach for these wanders, but the possibility keeps them forever locked in their world.

This sense of transitory-ness denies a literal reference to a specific time or a fixed place, and further alludes to an unsettled past and future. Dorn also alludes to mortality with reoccurring suns, moons and his simultaneous use of symbols of decay and new growth.

It would be nearly impossible to overlook the distinct manner in which Dorn renders his subjects and constructs elaborate scenarios. Materially, he incorporates watercolor washes, spray paint, acrylic, encaustic, and oil paint with the occasional palette scraping or found image. Where a delicately stained watercolor backdrop might turn serene, it doesn't take long for the alluring scene to be abruptly cut short by a dab of rich encaustic or even a necrotic glob of paint, or perhaps a broken down car– there’s a continual abjectness there, a disruption of the idyllic in both material and content, jarring the viewer back to reality.

In the project space, F+V presents the debut of Masshole Love, starring Lobsta Blue and the P-Town Pilgrim, by Rebecca Goyette.

Masshole Love is a performative video made by and starring Rebecca Goyette as Lobsta Blue, an iteration of her Lobsta Girl character, a persona she has been inhabiting to create performance art, video art and sculpture since 2010. Her series of Lobsta Porn videos explores sexual fantasy scenarios through the lens of lobster sex and human improvisation. Goyette riffs off of the sexual practices of lobster. Lobsta ladies box the strongest males down, squirt them with aphrodisiac drugs out of their foreheads, and get inside their lobsta man-caves where they molt their shells in order to have sex. The males have two "dicks" that can impale the vulnerable lady flesh, making her entire soft body a potential lobsta labia.

In Masshole Love, Goyette cracks open her character. Lobsta Blue, a Provincetown (P-Town) performance artist troubled by past sexual abuse, dedicates her life to sexual performance art and orgiastic behavior within the mask and shell of her couture blue lobster trousseau. She has created her own "act," called the "Lobstasexcitation Show" a mix between burlesque and New Age sexual guided visualization in which she seduces audiences to uncover their true sexual selves within the depths of the ocean.

Lobsta Blue’s world collides with that of the P-Town Pilgrim (played by artist Cesare De Credico), a local who dresses in authentic Puritan attire daily to psychologically maintain the order of his ancestors who landed in Provincetown as pilgrims. But being surrounded by the artistic queer culture of Provincetown proves inspirational to the P-Town Pilgrim, who secretly draws in the dunes and sews in his secret garden. Publicly, the P-Town Pilgrim makes sport out of ridiculing the creative types he sees around him. The meeting of Lobsta Blue and the P-Town Pilgrim triggers a transformation in each of them and in all the other characters they meet along the way.

Goyette uses the language of entertainment to turn back on itself. She hand-sews each costume, often tailor-made to her performer. In the case of Masshole Love, the costumed characters enter into a "knowing" improvisation, the basic premise and costuming is known, and when the shoot happens, the reality of the person melds with that of the "character". None of her players, including her, knows exactly what might happen, what emotions, sexual or otherwise, may arise.

In scenes shot in public spaces of Provincetown, participation with locals and travelers happens naturally. Whether shooting at Old Colony Tap or at the famous Provincetown Tea Dance, local flavor mixed with her costumed characters merging fact and fiction. Goyette combines her background in street theater with her need to create intimate scenarios potentially between strangers in her self-proclaimed "Borat-style" intervention into the Provincetown social fabric.

The mismatched romance of Lobsta Blue and the P-town Pilgrim is a pure "Masshole Love," a fantasy space where normal Massachusetts repressive boundaries are crossed and transformation can take place to alchemize dark pasts, both personal and historic, to move toward a more pluralistic expansive future. Goyette says, "I see the process of making my work as a form of magic, a rooting inward that imposes my inner world on the outer world and embraces each person who enters this imagined universe with love, honesty, scrutiny and, of course, lobstasexcitation”.

Please join us for what promises to be a very exciting reception for the artists on Thursday, Oct 17th from 6-9pm. For further information please contact Nick Lawrence at 212-691-7700 or nick@freightandvolume.com.