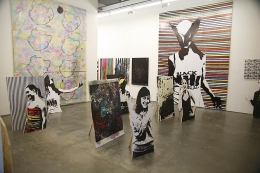 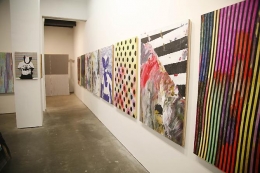 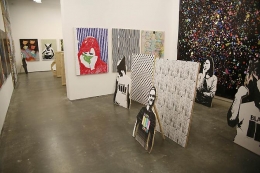 How and when does an image transcend its roots and become emblematic – a symbol for an entire generation or movement? What constitutes an archetype for a universal language - one instantly recognizable, and equally embraced, by the art world as much as the general public? A Campbell's soup can, a Bullseye target, a Shark suspended in formaldehyde, a poster of Andre the Giant or Obama? This is just one of the many provocative questions raised by Matt Jones in his forthcoming powerhouse solo at Freight+Volume, “Multiverse”, opening Thursday, March 31st from 6-8pm.

In Jones’ case, one of the particular emblems in question is the Black Flag T-shirt, a simple affair of four vertical black bars on a white background (designed by Raymond Pettibon in the late 70's), which resonated – and arguably helped spawn - an entire punk/hardcore consciousness. In his plywood cut-outs and large-scale works, Jones starts with a basic premise, a single image - and proceeds to paint, photograph, scan, Xerox, laminate with lo-fi Elmer’s glue, and draw over it again with alcohol-based markers until the end result is multiple generations away from its starting point. The technique itself becomes a gesture of boldness and refinement, designed to challenge the viewer’s understanding of memory and recognition in the digital/internet age. Peers of Jones, such as Wade Guyton, Kelly Walker and Josh Smith, also utilize similar techniques of image remove and repetition, but Jones takes the process one step further via his obsessive vision, his Buddhist-inspired focus, and the three-dimensional construct of his final product.