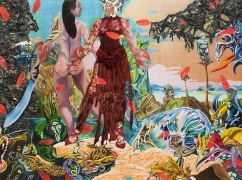 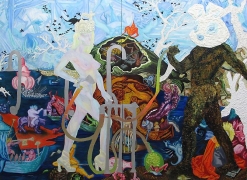 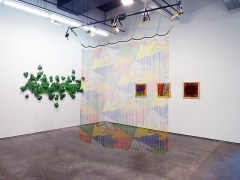 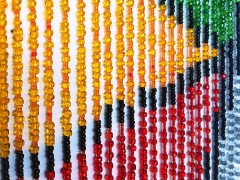 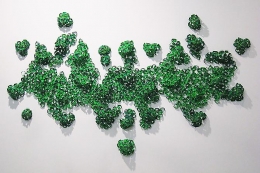 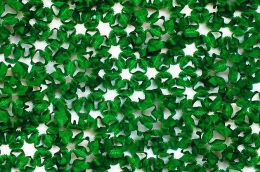 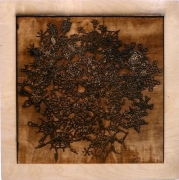 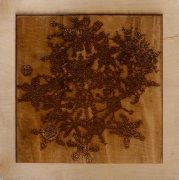 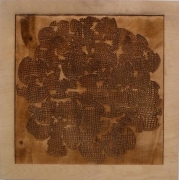 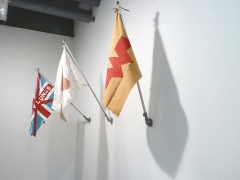 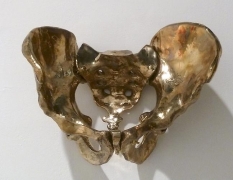 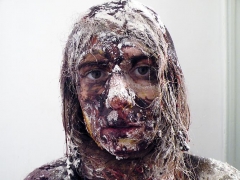 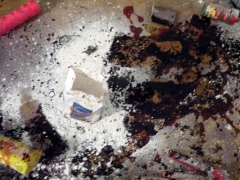 The life of an artist can be a nomadic one, for any number of reasons, amongst them financial, emotional and spiritual. In many instances, artists find more support and camaraderie in large urban areas, and for quite a few all roads eventually lead to New York (or London or Berlin). The four artists comprising “Migration”, the summer show opening June 23rd at Freight+Volume, are no exception.

Min Hyung brings a rich fantasy life to her expressive painterly narrative. In her newest series, focusing on heroic and mythological women, her personal history is intertwined with legend to form a compressed, colorful backdrop, against which her protagonists interact. Her thick impasto and tapestry-like collage are rife with idiosyncratic symbol and affect, leading the viewer in and out of a dream-like environment, which combines varied elements of her mixed cultural past. She writes: “In Alexander McQueen’s exhibition “Savage Beauty” at the Metropolitan, McQueen said,‘I want to empower women; I want people to be afraid of the women I dress.’ I often use his dresses for my female hero because his ideal woman overlaps the idea of my female hero.” As part of her narrative series “The Fifth World”, Hyung references old masters, science, history, culture, fashion, performance, comics, and surrealistic historical paintings such as Delacroix’s “Liberty Leading the People”, Bosch’s “The Temptation of St. Anthony”, and work by Mathias Grunewald and Max Ernst. Hyung’s painting “Madonna” derives from both the bible and the pop singer, as does her “Birth of Venus”, loosely based on Botticelli’s masterpiece. “My female hero is strong, confident, and yet retains her femininity; she comes from a place of power. She is a warrior and a nurturer…stylish, powerful, sensual, edgy, aggressive, positive, progressive, mighty, competitive, and majestic. She is never weak. She is dominant, yet she is generous.” Hyung’s own journey as an artist has been a long migration. She graduated with a BA in poetry/Korean Literature from Seoul Korea, and received her BFA from the Ontario U. of Art and Design. She has had solo exhibitions in Toronto, Calgary, and Chicago, and received several awards including a scholarship from The Art Dealers Association of Canada. Her work can be found in the Femme Art Collection in Toronto, Colart Collection in Montreal, and Howard Tullman Art Collection in Chicago. She currently lives and works in Toronto.

Eunah Kim (1973-2010) was also an artist from Korea who emigrated to NY for school and her art, and battled lung cancer bravely in the last few years of her life. Spirituality dominated her life and her art. Trained to become a Buddhist nun before coming to the United States in 2001, Kim earned a B.F.A in painting at RISD in 2004, and lived in Providence, San Francisco, New York, and Cambridge until returning to Korea in 2010. This posthumous show of select sculpture and wall hangings focuses on the insidious and poignant nature of her terminal illness. Happy Lung Flags (2009) is a series of three flags: one bears the image of a pair of human lungs, another is loosely based on the British flag and bears the words “Happy Lungs”, and the third bears the symbol of the comic book heroine Wonder Woman. The flags were made during Kim’s illness as a tribute to her besieged lungs, and represent the artist’s aspirations for health and happiness. The Casket (2004), made before Kim was diagnosed, is made of animal bone encased in white plaster. A prescient work, it explores the notion of preserving life after death. Lucy’s Pelvic Bone (2009), cast in highly polished bronze, is Kim’s last major work. It represents the concept of turning the dark reality of death into a lasting treasure, by celebrating what Kim considered a woman’s most sensual body part through the luxurious beauty of gold. For those who were fortunate enough to have known her, and experienced her brief but exemplary career, this show also serves as a memorial and homage to the artist. The migration suggested in Kim’s work is a journey into the afterlife; her work lives on in mysterious and ethereal ways. Her F+V project coincides with the solo exhibition “In Her Wake: Eunah Kim” at Gallery DA (149 West 24th St., 6th floor) from June 21st-July 29th.

Meridith Pingree’s kinetic sculptures literally move through space – and address issues of transience and impermeability in elegant, airy forms. The artist physically tracks human behavior and traffic patterns utilizing quasi-scientific, homespun, reactive sculptures. Sensors pick up on people's energy and movement throughout the gallery; her work exists as amplifications of this subtle energy, creating unconventional, complex portraits of people and spaces. Sourcing dreams, magic, plant life, robotics, geometry, and textile design, she amalgamates these into lifelike creatures. The Magic Curtain hanging central in the front gallery feeds off ambient energy. It mutates its shape, bending and curving in slow jarring movements using motion sensors coupled with small motors. Something like an ice crystal or virus, Pingree's works move and grow, falling into complex patterns, questioning meanings of space and time, and what it is when we consider something to be alive. Pingree is a New York-based artist, a graduate of Skowhegan and holds an MFA from RISD. She has shown widely, and is included in the upcoming survey of kinetic art at Brown University opening this fall.

Lastly, Genevieve White, a Canadian performance artist currently living and working in NYC, presents “Acsstion” - a video depicting the artist slathering layers of baking ingredients on herself and then literally drawing on the wall by using her body as a brush. The piece plays off of fifties’ Betty Crocker stereotypes of a woman’s place in the kitchen; consumerism and waste in general; and a spoof of classic performance tropes such as Yves Klein’s body painting from the sixties. “Acsstion” also embodies the notion of a perfect migration – from idea to drawing to conceptual performance – as well as the transformation of an artist’s body into living sculpture and onto a higher plane. In addition, Ms White will be performing a new piece live at F+V entitled “Earth and Breathing: A Dance for the Bones”. In this sensory presentation comprised of dance and contortion, the gallery floor will be covered in branches and cinnamon spices. White will be wearing a costume in the shape of an hour glass, and will roll over the branches, cracking them under her body. Stretching the fabric and the body in this sensory presentation is a metaphor for adaptation and change. The music score, composed by John Melillo, centers around wind and breath tones. White has been featured at MoMA, Chashama, Whitney Museum, Neuberger Museum, New Museum, Deitch Projects, The Kitchen, and Performa. She received her MFA from Parsons in 2009.

For more information please contact Nick Lawrence or Kevin Kay @ info@freightandvolume.com, or call us @ 212-691-7700. Have a wonderful summer.