Ink,Flashe, Graphite, and Gesso on Paper

Oil and spray paint on canvas

Oil and modeling paste on linen

acrylic and oil on canvas

Oil and paint tube on linen

Paintings on the Wall, Devil Down the Hall, 2019

People Who Take off Their Clothes, 2020

Acrylic and oil on canvas 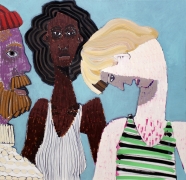 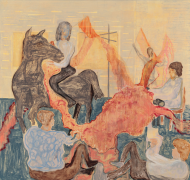 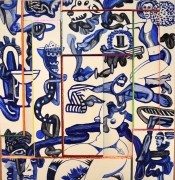 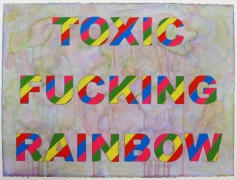 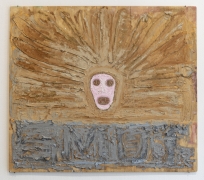 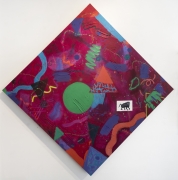 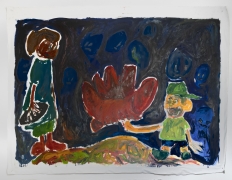 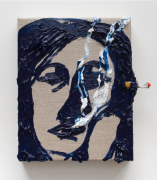 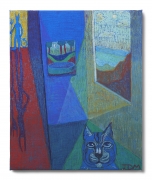 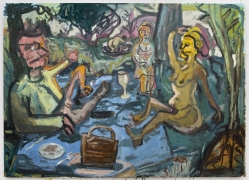 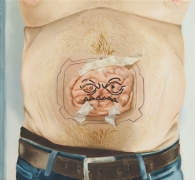 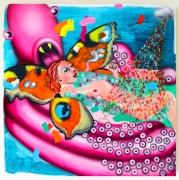 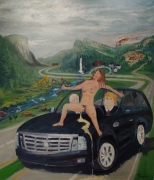 Confronting the dysfunction and uncertainty of modern society, the works on display in Pungent Dystopia embody aspects of escapism and fantasy across alternatingly text-based, figurative, and abstract pieces. Paralleling our “post-truth” political climate, marked by deception, misinformation, and media manipulation, the artists included in the exhibition dive headfirst into their respective aesthetic constructs, deconstructing the precarious state of contemporary society with its own mechanisms. On the other hand, Jablon and DiLeo’s purposely jumbled, disorienting compositions, grounded in text and abstraction, respectively, provide visual analogies of hyper-stimulation and a world in which even journalistic facts are called into doubt.

With their pastel hues and crude forms, Fullana’s canvases radiate a saccharine, childlike sensibility that is offset by her often garish and explicitly sexual subject matter. In All Inclusive and Fountain, she presents sex as a sort of commodity, detached from emotion, recalling the hyper-sexualization of teens and society as a whole. Paradise Birds presents a surreal scene wherein a disembodied, distorted female head hovers above a jungle; surrounded by glowing white birds, the subject appears simultaneously distressed and transcendent, reflecting Fullana’s ability to draw seemingly mundane imagery into larger dialogues. Juxtaposing sentimental scenes of children playing baseball with apocalyptic backgrounds suggesting nuclear devastation, Hüppauff’s paintings similarly blur the lines between nostalgia and anxiety, obliterating innocence with the extreme outcomes of war, and force the question of whether children coming of age in contemporary society still have the possibility of experiencing a true childhood.

Weaving abstraction and figurative forms within his geometrically divided panels, DiLeo’s work expresses the vacuous gulf between fact and fiction that has come to define our current political climate. However, he molds this malleability of truth into a creative tool, constructing riddle-like networks of strange, psychedelic forms. In Trouble and Delicious Life (II), Jablon skews the spacing and orientation of individual letters, opening his snatches of text to vastly divergent interpretations. Emphasizing the physical forms of each letter to the point that they take on their own meaning, Jablon’s similarly appears to ruminate on the dissolution of unequivocal meaning and truth in contemporary life.

Inspired by VR, 3D animation and video game graphics, Wiley’s canvases fixate on a red-haired, avatar-like character. Recalling the notion of the “uncanny valley”, a theory that as robots become more realistic, they reach a point where their human likeness becomes unsettling, his paintings meditate on the increasingly common presence of virtual reality and our haphazard ways of coping with it.

Amidst the manic, theoretical conjurings and dreamscapes of Pungent Dystopia, Sam Bornstein’s Pink Flag stands as a flare of clarity, marking both the exhibition’s grounding in day-to-day life as well as reaffirming our individual sovereignty and ability to work as agents for change. Appropriating traditional revolutionary imagery, muted with pink and lavender tones, Pink Flag presents a vision of progress linked to the fundamentally transformative power of the individual. Pungent Dystopia chronicles dysfunction and injustice in the world, but ultimately, as in paintings like Pink Flag, has more than just an apocalyptic message - optimism, love, and hope are manifested, and conveyed by the artists, for the planet, and for mankind.

––Samir Nedzamar
Samir Nedzamar is an artist and writer based in NYC. His work and writing focuses on qualities of abjection and psychological expression, with particular emphasis on the movements associated with post-WWI German Expressionism. Samir studied at Bard College and Hunter College in NY.