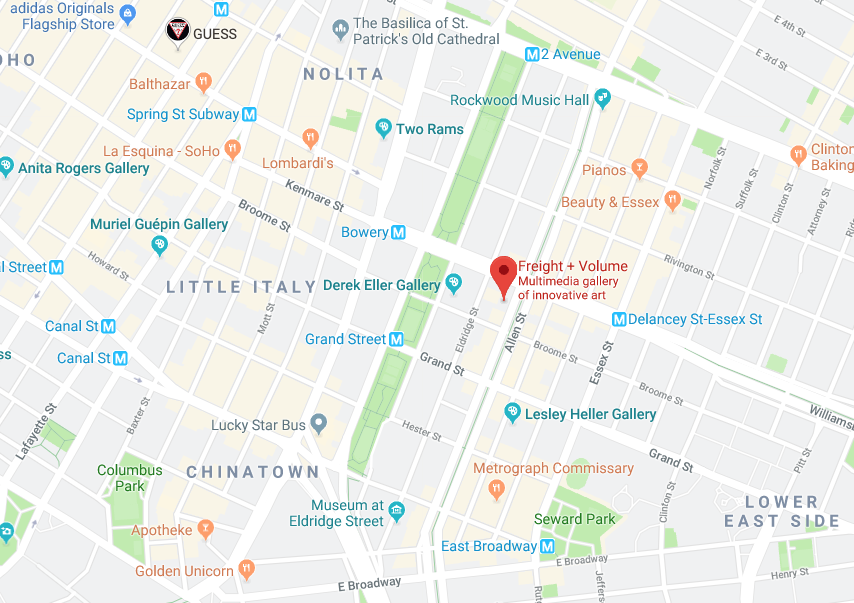 MISSION Freight + Volume is dedicated to showcasing the work of emerging and established artists, and in particular, work which is innovative and not afraid to take risks. While Freight + Volume is especially interested in narrative and text-based material, ultimately our predominant criteria is the quality of the work itself, regardless of technique, content or style; with the motivation to show dynamic, visceral, and provocative new work in all media and dealing with a range of subject matter. In addition, Freight + Volume regularly publishes limited-edition artists' books.

HISTORY
Established in 2005 in the Chelsea neighborhood of Manhattan by Nick Lawrence (co-founder and former partner of LFL Gallery in Chelsea, owner/director of Arts+Leisure in Spanish Harlem, and owner/director of DNA Residency in Provincetown, MA), Freight+Volume was formed by combining the text-based, narrative philosophy and limited edition book focus of its two-year predecessor, Volume, with the motivation to show dynamic, visceral, and provocative new work in all media and dealing with a range of subject matter.  In October 2015, the gallery relocated to the Lower East Side of Manhattan.

ARTS + LEISURE
This modest project space sitting atop Carnegie Hill in Manhattan was established by Nick Lawrence (founder of DNA, LFL, and Freight+Volume) in spring of 2014 as an antidote to the hyper, market-driven systems currently ruling much of NYC and the art world at large. A place to pause and remember that, at the end of the day, art needs to be viewed, contemplated, reflected upon, experienced - and enjoyed. Arts + Leisure is located between 100th and 101st streets, opposite Church of the Life Changers and Ministries of Manhattan and a community garden. We’re a few blocks south of El Museo del Barrio, and Moustache, El Aquila, El Paso restaurants, as well as the Lexington Social Bar; north of Joy Burger, Mt Sinai Hospital, and East Harlem Childrens Center. Stop in, relax and see the show, and check out our growing library of artist books and catalogues. We host a number of projects per year as well as frequent readings, performances and film/video screenings.
For more information please visit artsandleisure.net.

The DNA Gallery, founded in 1994 by Nick Lawrence, has for the past 8 years been home to the DNA Artist Residency Program. Every year artists are invited to participate in a one or two-week residency in Provincetown, Massachusetts. While on the Cape, artists create new work inspired by their surroundings or continued from their existing studio practice. They can work both offsite and at DNA in a 2,000 square foot studio, and are also provided free housing. For its eighth season, over sixty artists were invited for individual residencies.The residency is by invitation only.

Facebook: Freight and Volume Gallery
We are not accepting unsolicited submissions at this time.