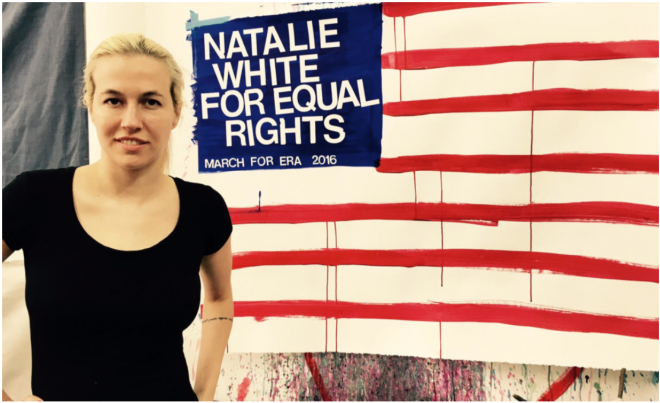 On January 15, both houses of the Virginia legislature voted to ratify the Equal Rights Amendment, finally giving the bill, passed by Congress back in 1972, the 38 states needed to make it law.

The ratification resolution is a big step forward for the E.R.A., which promises to guarantee the same rights to all Americans regardless of gender.

But it’s also a personal achievement for artist Natalie White, who has been working in support of the long-stalled amendment since 2015.

“I was in the room when they passed the vote,” White told Artnet News. “The whole gallery of the senate and the house just erupted.”

In an effort to ensure that the amendment’s ratification is recognized, White has helped file a lawsuit against David S. Ferriero, the archivist of the United States, asking the court to compel Ferriero to record Virginia’s ratification in the National Archives, which would the amendment closer to becoming a law.

The E.R.A.—though effectively dead for decades—is still a hope for some on the left. Opponents of the amendment point out that the original ratification deadline set by Congress was March 22, 1979. An extension to June 30, 1982, came and went, with ratification from only 35 states.

White’s lawsuit contends that there is nothing in the text of the amendment about a deadline. “Our argument is a very textual, conservative argument,” she said.

“The extra-textual deadline is unconstitutional as it imposes unlawful constraint on the states to elect a schedule of their choosing on which to consider and ratify—or decline to ratify—a proposed constitutional amendment,” argues the complaint.

Advocating for the E.R.A. is the backbone of White’s practice. In 2016, she staged a 16-day E.R.A. march, walking 250 miles from New York to Washington. When she got there, White painted “ERA NOW” the steps of the Capitol in red letters. (She surrendered to authorities after her illegal act and was banned from the Capitol building for six months.)

White moved to a Virginia swing district last year to support a campaign to unseat Republican incumbents who refused to back the amendment. Before that, she staged art performances at the state capitol as a means of civil disobedience.

“The police had to cuff us and physically drag us out,” she said.

Last year, White refocused on the election and helped create an artist-designed van from which organizers lobbied voters to support the amendment. “We were focusing on ten races hoping to flip two, and we flipped six,” White said.

The artist plans to continue pursuing her goals, even though she’s facing quite some opposition.

Her lawsuit against Ferriera is facing separate legal filings by the attorneys general from Alabama, Louisiana, and South Dakota seeking to bar the archivist from recording Virginia’s ratification. Their suit contends, in part, that Ferriera needs to recognize the states that rescinded ratification.

But White’s main frustration now is that the news cycle is dominated by impeachment proceedings, and that few people are talking about the E.R.A.

“I cant believe every single news station isn’t reporting on this,” she said of the ratification in Virginia. “This is a happy and uplifting win.”