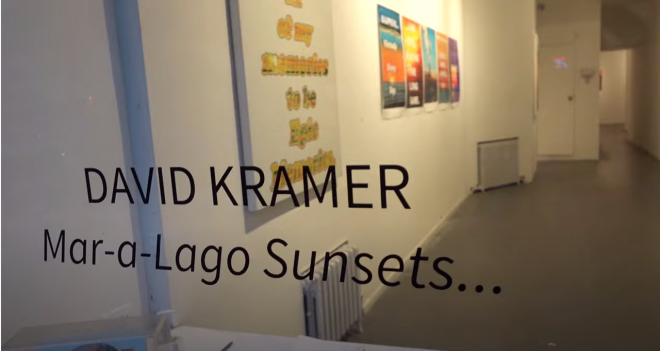 James Kalm has been following and laughing at, the work of David Kramer since his appearance on the Williamsburg art scene in the early 2000s. As noted in the commentary, your reporter has discussed Kramer’s evolving opinions regarding the act of, and being considered a practitioner of “painting”. “Mar-A-Lago Sunsets…” is a not so sublet jab at the current administration, and attacks what the artist sees as it’s “nostalgic, saccharine vistas…” using… “biting textual commentary.” Many of the works are substantial hooked rugs, using miles of high-keyed yarns. These “tapestries” mimic the urgency of expressionistic paintings with their high pile texture and loose hanging threads.

A musical introduction is provided by Milo Z www.miloz.com . This program was recorded October 25, 2020.