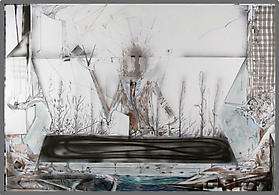 For his second solo exhibition at Galerie Jan Dhaese (Ghent, Belgium), New York-based artist Max Razdow presents a remarkable selection of his most recent drawings in juxtaposition with some of other artworks such as the artist’s first tapestry work, poetry collages and a sound piece. Future Myths of the Surface, the mysterious and intriguing title of his show, is more than anything else a complex self-portrait: a courageous, hyper-personal collection of thoughts, sensitive, fragile and open-ended experiments, undefined doubts, lyrical poems and muted songs about imagined, fictional figures, symbolic animals, creatures, and deities that wander through the artist’s scenic and endless universe. Razdow is much more than a talented painter: he is an inspired storyteller who delivers sparks of magic through self-generated images and narratives.

The Gift, one of Max Razdow’s latest drawings, righteously deserves a central position in the exhibition. In this work, the artist seems to have captured the unknown: the anxious, premature phase of the artwork, when loose ideas light up in the dark, spontaneously, all equally brilliant although unstable, randomly arranged, not taking any concrete forms yet. This phase is the birthplace of any creative process. In his own words the artist describes the depicted scene in The Gift as follows: “An artist or wizard gives his pencil to the easel, as behind him a waterfall deity watches and a field of debris sweeps around him. In giving his pen to the world, he is waiting for the world to talk and listen.” “The Gift” is a work of great symbolic value in Razdow’s oeuvre as it refers to the artist in relation to himself, his work, his creative process and the world. Interestingly, Razdow merges the artist with the fictive wizard figure, which inevitably also establishes an important relationship between the creative process of art making and a process of alchemy and magic. In the drawing, behind the artist-wizard, a giant river swirls uncontrollably, mercilessly pulling debris, dirt and junk into its fatally current. In Razdow’s description there’s mention of a waterfall deity, an imaginary creature greater than man, which adds even more symbolic value to the enormous natural force and mystic energy that the river brings forth. Amidst this scene of aquatic chaos a single, lit candle or torch quietly burns, perhaps offering a fragile moment of peace, or a spark of hope into the artist-wizard’s phenomenal and existentially restless space. Most remarkable in this drawing is the relationship between the artist-wizard and the canvas in front of which he stands. The skinny figure dressed in a pale, purple robe gives his pencil to the imageless canvas and consequently “waits for the world to talk and listen.” In doing so, the artist-wizard, aka Razdow, voluntarily abandons all control over the artwork in progress and instead decides to wait for the unknown and unimaginable to happen at its own pace and time. Here, it almost seems like the artistic, tactile process of drawing, erasing, scribbling and writing is replaced with the liberating act of yielding to the powers of mediation and intuitive response. The physically passive, introspective journey of the artist gains importance over the active process of art making or replaces it entirely. If this is true, the gift in The Gift is nothing less than ultimate freedom through submission or yielding to what may come, albeit conditionally gained in exchange for the artist-wizard’s artistic skills.

Poetic and symbolic artwork like The Gift sets the tone for Future Myths of the Surface. Inspired and often strangely mysterious titles for drawings such as At the Pool of the King's Face, At the Cave of the Tile Fish and The Child and the Shark, further introduce us into Razdow’s multi-layered, uncanny universe. “The drawings are like a set of poems really, or individual myths amid a sort of greater imagined history of the present and future,” Razdow explains. The absence of a traditional, linear, thematic narrative in the exhibition is indeed interesting and allows the artist and the viewer to leap from one subliminal scene into another, passing through different time zones, crossing galaxies, inventing and reinventing both mythical and mundane characters. He does so with the almost frantic quality of a rebellious, underground writer of weirdly illustrated fantasy and science-fiction stories.

Contrasting with the complexity of the layered, metaphysical and existential significances in Razdow’s recent artworks, the reference to surface in the title of his solo exhibition is deceptively simplistic. Interestingly, a previous but short-lived version of his show’s title read: Future Myths of the _______. Soon thereafter the unexplained blank space was filled in by the Surface. “I had this idea of the surface while walking on the beach this week, watching the waves tumbling into each other and realizing the tenuous persistence of the surface of the water,” comments the artist in an explanatory email. When thinking about it critically, Razdow’s reference to the physical surface is deconstructive and self-critical; it is perhaps even the result of an impulsive phase of rejection of the symbolic value given to artworks, an attempt to disconnect himself from the multiple, associative, self-created complexities in his artworks. On one hand, this is true. On the other hand, the artist also seems to refer to the surface as a projection screen for potential future myth, which the scenes in these drawings represent, to expand or play on. Following this interpretation we could easily think of the surface in the context of film screenings: projections of captured light onto a traditionally white, blank surface, much like the imageless canvas in Razdow’s core work. Such moving pictures only exist temporarily. Often less than a second after one image touched the surface of the projection screen, it irreversibly disappears into perpetual, change, forcing each one of them into the transient space of our memory.

This is what the artist wants his drawings to be: temporary, changing and impermanent images. Perhaps this is his greatest challenge: to create artworks that remain stories, unwritten, maybe even only suggested and known in detail by few, while most of their nuances irrevocably get lost in the delicateness of oral history, leaving their surface to be remembered. Max Razdow wants to make artwork that will get lost in the impalpable future, like a time machine that we buried when we were children but about which we have consciously forgotten, leaving loose images dancing deep in our subconscious.

Jan Van Woensel is an independent curator and writer.
Edited by Vanessa Albury.