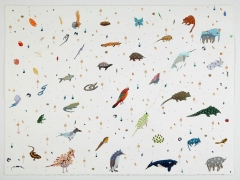 Mi Ju went out West. She ate a tangerine one night, and the fruit dribbled all over her dreams, which were suddenly sweet and orange-tinted and bizarre. Later, in her Long Island City studio, a painting was born from this citrus-soaked fantasia, one aptly titled I Dreamt a Big Cat After Seeing a Tangerine. Simple enough genesis, but nothing simple about this jam-packed composition which—like many of Mi's paintings—envisions a multi-leveled sci-fi architecture, tangled in its own delirious logic. Disembodied heads traverse and perhaps pollinate a lushly blooming planet shaped like a feline’s head; though static, everything in the painting seems eager to squirt and spurt off the canvas’s edges. This and other large-scale works in “Nest” depict alternate maybe-universes, terraced pleasure-gardens floating through space. Ju talks of Chinese and Native-American mythologies in which the world grows from the back of a monumental turtle. In her studio, such oddities seem commonplace. Everything is alive and growing, feeding on itself, candy-colored and fecund. A tiny lump on a canvas’s lower edge casts a massive shadow: A monolith in bloom, equal parts maze, monstrous face, and self-perpetuating biosphere.

Where's all of this coming from? Mi was born in South Korea, where her father runs a textile company (her own, early sculptures were biomorphic creatures built from fabric) and her mother makes a living staging floral arrangements for Buddhist temples. Time spent around the latter's occasionally gruesome illustrated tableaux definitely left its influence, she says, as did a general interest in indigenous peoples, like that of the Aboriginals in Australia, where she would later spend the better part of a year. Mi's undergrad education was at the San Francisco Art Institute where—though she's a teetotaler—the artist absorbed that city's psychedelic tang. Peter Saul's hyper-colored influence loomed large. Ditto the work of Nick Cave and his cluttered found-object assemblages. Other touchstones would have to include the heady, collage-based riffs of Fred Tomaselli; Takashi Murakami's cartoonishly explosive Superflat aesthetic; the lurid, hyperactive hellscapes of Bosch. Now that Ju's in New York she's spending a lot of time inside, but thinking about nature—some if experienced firsthand, on trips, the rest of it in the pages of books: Ernst Haeckel's Art Forms from the Ocean; Rob Kesseler and Wolfgang Stuppy's Seeds; back issues of National Geographic. Those reference guides share shelf-space with many dog-eared copies of Haruki Murakami's oeuvre, not to mention a copy of Where's Waldo? Ju's paintings are a wild melange of these far-flung inspirations, churning together in their own keyed-up atmospheres.

That chaos is shepherded into a rigid order in an accompanying group of watercolor-and-ink-on-paper works (the “Nest” series) and some smaller canvases. In the former, a serial procession of forms—tiny, icon-like graphic baubles—generate a hypnotic wallpapering effect that is more than merely decorative. The tenderly painted little animals, heads, and plants march along in orderly rows, a procession of emoji repeating the same nonsense phrases. In some of the works, these icons coalesce into arrangements—a goofily smiling face. Elsewhere, they resemble a sheet of stamps, or lovingly ornamented blotter acid. The works on paper pin down and dissect, with an almost scientific eye, the unhinged flora and fauna that run rampant in the large paintings.

The final group of work in this exhibition includes small paintings in which food assumes the form of body and landscape: Imagine Saul and Erik Parker tag teaming to readdress the legacy of Giovanni Arcimboldi. Corn dogs become eyeballs; ripe blueberries mass into the head of a beaver, which wears a banana as a bonnet. Everything appears to be seen through a microscope, a zooming close-up to the cellular level of some genetic neverland, a place where fruits and leaves swarm to form mostly benevolent creatures, smiling as if drunk on their own hues. Not everything is totally copacetic: Check out Sweating Hamster, a portrait of fur-crawling anxiety.

As Mi's exhibition title suggests, “Nest” is a place to burrow, to get lost, to lose yourself. There are worlds within worlds and paintings within paintings here. Stand close and imagine your body shrinking, Magic School Bus-style, into a size appropriate to the further exploration of these eccentric populations. Can't do it? Eat some tangerines, dream a little dream. Or just be glad Mi's wild places exist, ceaselessly generating their own myths: comic, absurd, frightening, pop-eyed, bursting at the seams.

Born in South Korea, Mi received her BFA in painting and drawing at Yeungnam University and the San Francisco Art Institute. Later Mi went on to earn her MFA in painting and drawing at the Pratt Institute in Brooklyn. She has shown in group and solo exhibitions in Seoul, San Francisco, San Diego, Copenhagen and New York. Her work was recently acquired by the Fredrick R. Weisman Foundation of Los Angeles. This is her third solo show at Freight+Volume. Mi currently lives and works in Brooklyn.

Please join us for a reception with the artist on Thursday, April 16, 2015 from 6-9 pm. Refreshments will be served. For more information please contact nick@freightandvolume.com or call 212-691-7700.