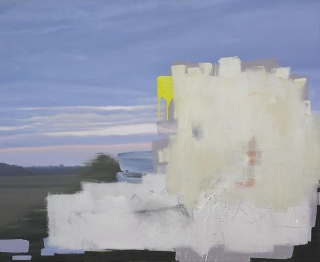 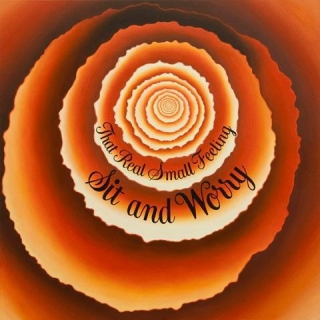 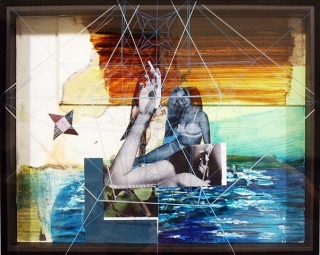 “HAYMAKER” marks the launch of F+V’s 2011 season with a bang. Featuring five extraordinary talents new to the F+V arena, “HAYMAKER” examines the role of commerce in art, and in particular, the connection between opulence and decadence in this provocative quintuplet.

“Money is a kind of poetry,” Wallace Stevens once said, and nowhere is this more evident than in Pop and post-Pop art of the last few decades. From Warhol’s silkscreened dollar signs to Damien Hirst’s bejeweled 100-million dollar skull, everyone wants a piece of the action; the borderline between art as commodity and commodity itself is officially blurred. The five artists in “HAYMAKER” explore the message and madness behind this trend, in subtle and not-so subtle depiction. Warhol also coined the familiar phrase “everyone is famous for fifteen minutes”, and in the gallery world, artists’ careers in many cases are abbreviated: five years in the public favor, five weeks for the typical run of an exhibit, five days in the case of an art fair, or literally five seconds when a work is on the auction block. Cruel and unusual marketing practices are the norm these days; an artist leaves grad school, and if lucky, grabs the horn of the mechanical bull, and holds on for dear life while the attention lasts. During that time the market demands its version of the classic dog-and-pony show; artists and galleries who are better equipped to satisfy the appetite for hype and trend generally survive the longest in the rodeo, and those with the long view tend to, well, take a long time to bear fruit - both commercially and critically.

In “A”, Warhol’s stream-of-consciousness play from the Factory days, his protagonists are driven by sensation – the more immediate the better. They appear to equate getting high with making art with having sex with making money. Not necessarily in that order. In this world, ground zero of the birth of contemporary art as we know it, immediate gratification – and money - seems to be the driving forces of creation. “HAYMAKER” certainly derives its title in part from that quest, at the same time delivering a one-two punch to the gut of visual complacency. These five artists share a thirst for aesthetic immediacy and impact, as well as bold referrals to Pop and post-Pop imagery.

“Towards a Common Understanding”, Brit American-transplant Doug Fishbone’s classic language-driven, internet-culled video piece leads the viewer down a faux-academic lecture tour towards logic and madness with a zen-like “What’s my favorite Nation?” he asks in a companion piece as polyester-suited, sleazy “non-profit” telemarketer: “Donation!” he replies. Fishbone delivers the goods like a stand-up comedian: one-liners and comic thrusts give way to a visual crescendo. Fishbone punctuates his visual journey with subliminal flashes and astonishing clues, like an animated Guinness Book of World Records; full of humor and exaggeration, but ultimately leading nowhere. The message is the medium, to quote McCluhan, and the medium is money.

Ye Olde Shaggy Dog story is further echoed by Eric White’s spoofed album covers from the 70s and 80’s; music market soundbites brimming with self-reflection and capturing the (m)admen strategies of the day. His tongue-in-cheek irony comes into broad focus with a new canvas titled “1967 Ford Ranchero (Coming Home)” – a direct hit on the American Dream of yesteryear - and, given that nostalgia is now a commodity – of today. Akin to Ruscha and Prince in his elevation of the automobile as American folk-hero – White deadpans his audience with a 50’s blend of realism and parody, ultimately convincing us that marketeering, with its inherent sex appeal - can trump content and actual value any day of the week.

Damian Stamer also wields a knockout visual punch with his exquisite blend of trompe-l’oeil realism and pure Ab-Ex chops. The viewer is stopped in his or her tracks with the stark juxtaposition of representation and suggestion in works such as “Barnyard Brawl” and “Portal”, and left to ponder the significance of the difference between the two. Stamer begs the art-historical question – is there any difference between realism and abstraction at all – when at the end of the day one is confronted with only paint and canvas, and it’s all optical illusion anyway. Stamer transports us from gallery to Heartland and back again in his American vistas – the art market’s fluctuations, its in-favor/out of favor oscillations between the two genres – lead the way.

In her gorgeous collages and dioramas such as “Venus in Furs”, “Eye Pecker”, and “Miami Man-Eater” Kristen Schiele continues this dialogue with the art market, liberally seasoned with visual twists and suggestions. Again, ‘60s and ‘70s advertising icons and soft-porn stars navigate the way in her dazzling tableaus. Layers of Pattern and Decoration provide a fitting backdrop to paid-for sensuality, commerce-driven lust, and the over-riding message that “love is the drug” - the ultimate commodity. Schiele also pokes fun at the idealistic conventions of utopian society thriving concurrently with the 60’s generation of orgy and intoxication she parodies; both realms share the jaded yet seductive dysfunction typical of the time. But Schiele manages to expose the commercial underbelly of the “psychedelic generation” in the way it’s marketed and packaged today.

Last but not least, this exhibit showcases the exuberant, raw talent of Tatiana Berg, who almost fetishizes paint and wood in her wildly colorful mobile floor sculptures. Berg appears to objectify and parody expressionism in these virtuoso painted sculpture; like Schiele and Stamer, she straddles two distinct disciplines with her hybrid works. Tethered in the physical world of paint and cloth, gravity-driven in their paint-handling and gesture, they seem ultimately propelled by their own energy, like a solar-powered car or a windfarm. Collected in one space, they round out a powerful and playful debut at F+V, for five undeniable talents – all forces of nature to be reckoned with. “HAYMAKER” guarantees to deliver a vibrant Red Bull jolt to the Chelsea system.


Please join us for a winter-warming reception for the artists on Saturday,
Jan 8th from 6-8pm. For further information please contact Nick Lawrence or
Kevin Kay @ 212-691-7700, or info@freightandvolume.com.